Today we made colourful roosters. Rooster begins with the sound /r/. So does Rose, Ruben and Ros. Rainbow, rain, rocket and Red Rex all begin with  an /r/ sound. Please come and see our display on our classroom windows. 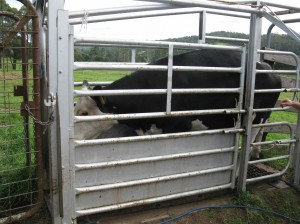 Cow in the crush. 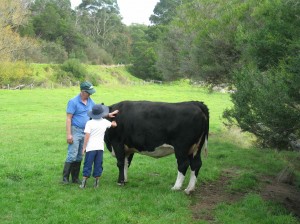 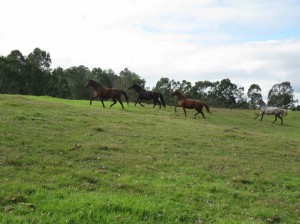 Horses on the hill. 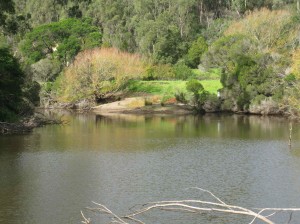 Look closely and you might see a platypus in the distance. 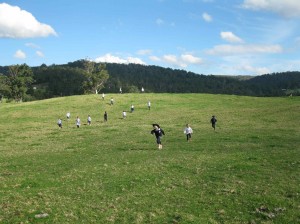 Running down the hill. 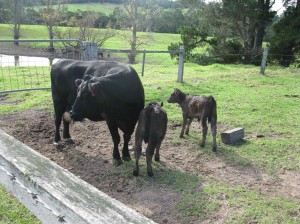 The Prep/Ones visited the Joiner farm in Genoa on the 7th May, 2013. This was as a part of our Science theme of Living and Non Living things. Thank you so much to Darren and Tracey for showing us around. Highlights of our day were seeing the baby calves, patting the horses and being weighed in the crush. We were all extremely excited to see, from a distance, the ripples of a platypus in the dam. We also saw an azure kingfisher sitting on a branch. Thank you also to Cate Tregellas for joining us.

On the 2nd of May, 2013, Mallacoota sent their best young surfers to compete against the best in the Surfing Victoria team titles. The team consisted of Chloe and Brodie Scott, Kahli and Chiara Migotto-Brown, Tom Reichelt, Hannah Searl and Arrow Embleton-Mew. A huge thank you must go to our local sponsors. Mallacoota Pharmacy, Mallacoota I.G.A., City to Surf transport and Mallacoota Butchers. Without the support of the community the students would not have been able to attend. Thank you very much. See below for the students and my report. 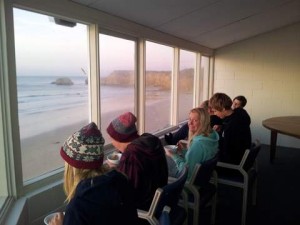 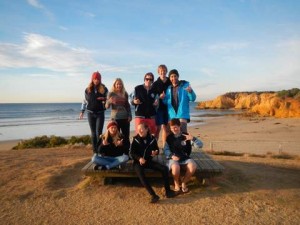 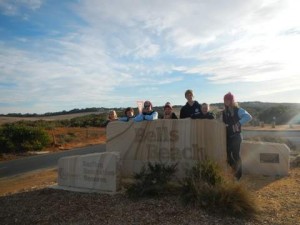 On the 2nd of May, seven of Mallacoota P-12’s keenest surfers, Kahli, Chiara, Chloe, Brodie, Tom, Arrow, and Hannah accompanied by Simon and Priya travelled to Torquay SLSC for the night, to then surf at the state championships on the 3rd of May at Jan Juc.

Coming third place in our heat ‘the Coota groms’ made it into the finals placing fifth in the state. We all had a fantastic time and a great experience. Quotes from the students about the trip;

“A top effort from everyone who participated” – Chloe

“Making the finals and working as a team” – Tom

“Getting to surf a new break and socializing” – Brodie

“It was a great experience & improvement from last year. The highlight was touching the sand at Bells Beach” – Hannah

“An amazing experience, so much fun, great exposure to doing something that I love doing and wouldn’t be possible without all the support. Huge thank you to Simon & Priya” – Kahli 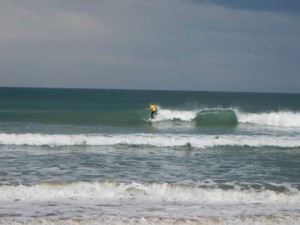 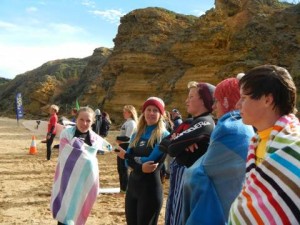 “Surfing all day and having fun” – Chiara

We would like to thank the following on behalf of the seven of us; Simon and Priya Berry (for driving), Nigel Allison (for inspiration and organising), Jade Nolan (for great training). our parents (for their support), and the following for sponsorship – City to Surf transport, Coota Butchers, Coota I.G.A., and Coota Pharmacy.

The students were very excited to leave school (2 hrs early mind you) for the surfing competition. Spirits were high even though the the team was looking at an 8 hr journey. We arrived in Torquay at 10pm and sought our beds quickly. The students woke and ate breakfast looking out over Torquay main beach while the sun came up. It was decided a trip to the spiritual home of surfing,  Bells Beach, was on the cards. After soaking up the ambience at Bells students headed to the competition. 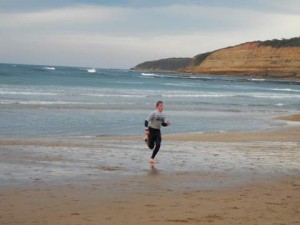 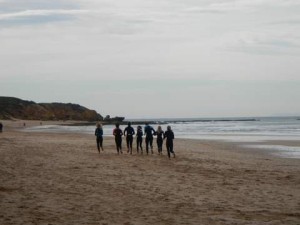 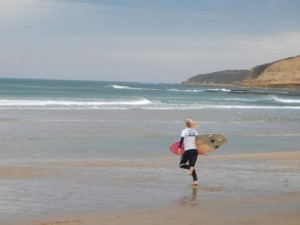 The students did not have to compete in the qualification round this year and were straight through to the semi-finals. The swell that the students received in the semi-final was extremely challenging. But thanks to the great team work, particularly of Tom, Chiara and Arrow (who all completed their 2 waves in less than 10 minutes) the team secured the 5 pts for finishing early and made it though to the final. 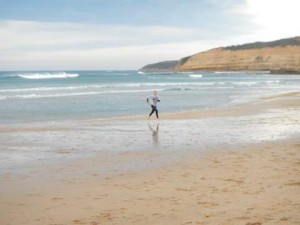 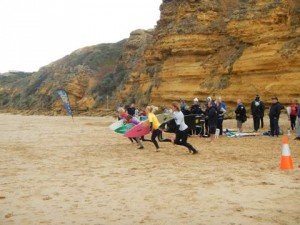 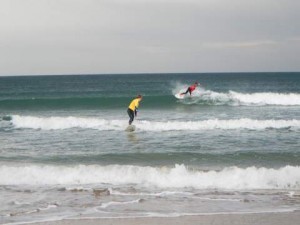 The final was an extravaganza of young surf talent. Wonthaggi, the eventual winner, had every surfer completing bottom and top turns, as well as some floaters. The swell was a lot more kind this time and the Mallacoota team did fantastically. Chloe and Kahli grabbed two great waves each, which was followed up by Hannah who scored solidly on two. The team was so efficient thanks to Tom, Chiara and Arrow, Brodie was left with 20 minutes. Her last wave was the best of the day for the team. A fantastic right hander with lots of turns. The students were ecstatic after the final with such a great effort by the whole team. They placed fifth in the state, but to all it felt like first. 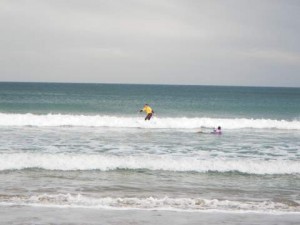 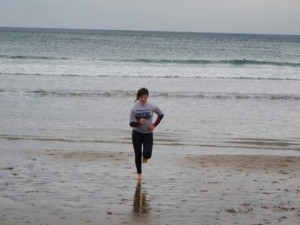 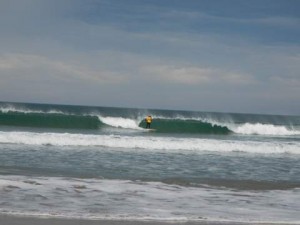 A large thank you to Jade Warren for her expert coaching and training sessions. Thank you Torquay SLSC, who offered fantastic accommodation, Nigel Allison for assistance on the day and Priya Berry for accompanying us.

I lastly want to thank the students. They should be proud of themselves, as I know Mallacoota P-12 College and Mallacoota in general is. Their behaviour was exceptional, energy was contagious, and manners were second to none. Well done guys!!! 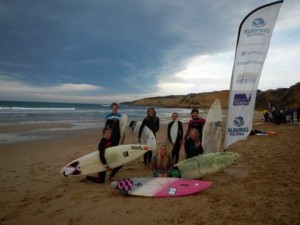 ‘Eco-Cubby is a workshop program for children that place architects and designers in schools and communities to promote the concept of sustainable design. Through the development of an Eco-Cubby, children engage in challenging dialogue to learn about, build awareness of and take action for sustainable living.’

Kathy Scott, Leading Teacher-Primary, introduced her staff to this project early 2012. The project was developed by the City of Melbourne and Regional Arts Victoria to encourage young people to explore sustainable living.  Lisa and I jumped at the chance for our 3 / 4 class to be involved in the Eco-Cubby Project. Kathy registered us and we were accepted to become part of the program. Regular visits during the year from our architects, Sunny Wilder (Building Architect) and Cathy Pirrie (Landscape Architect), saw the students move from whimsical ideas of what a ‘dream school cubby’ would be,  to the designing and making of a user friendly, environmentally sustainable and practical model of a cubby for our school ground.

Lisa and I embraced the idea that this project could be embedded into our core curriculum. Kelly Boucher, Gippsland co-ordinator of the project, visited us to observe our progress. She was excited about the work we were doing and commented that the children showed a very high level of commitment and congratulated us for making the project a real part of the curriculum.

The model of our cubby has been on display in Melbourne at the Sustainable Living Festival and will be returned to us over Easter. We will display the model, and a journal of the students’ collated work, at the school in Term 2. Meanwhile, enjoy the short films that show some of the work the Year3 /4 students did during the year towards their Mallacoota P-12 College Eco-Cubby.

Thanks to Don Ashby for the filming and Paul Bryan for opening our website! 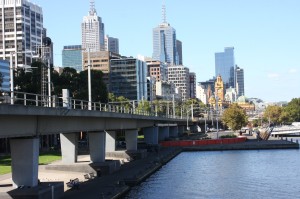 City scape from the Aquarium 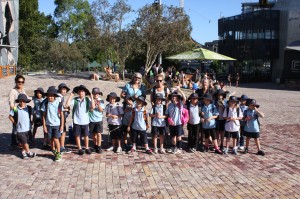 Thank you to all those parents and family members that joined us for a celebration of term 1 work.

Have a great break, Keep Safe!

On the 2nd of March, 2013 five of our students, Ryley B, Ryley M, Patch, Steven and Deklan, were extremely privileged to be able to participate in the  full bore shooting hosted by the Rosedale Rifle Range.  A large thanks goes out to the Rosedale rifle range for professionally hosting such a fantastic event. The coaches were fantastic! A huge thanks to Jim who’s experience and assistance in driving was invaluable.  Please read on for the students report. Also check in a week or two for some very professional photos (Thanks Ryley B) 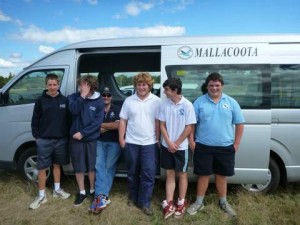 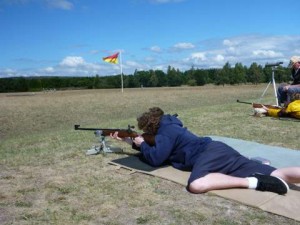 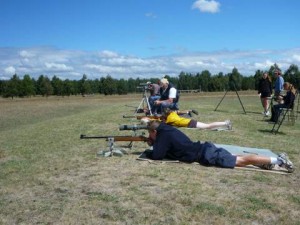 Ryley Broome: Excellent score of 35 out of 40 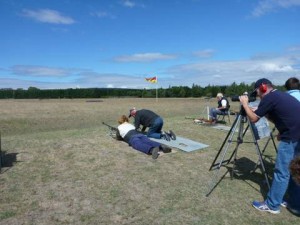 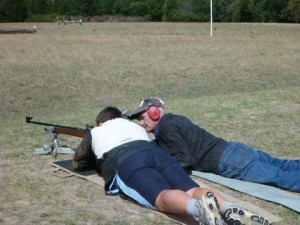 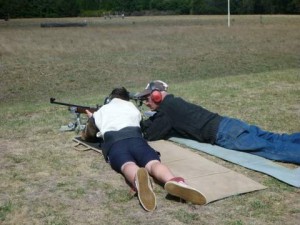 We missed out on 3rd place by 3 points.

The weather was good but it was really windy and it affected our accuracy a bit. Overall we had a really fun day and we hope to go again next year. 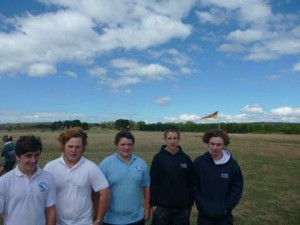 Today we went for a walk in the  rain looking for signs and talking about Road Safety.

Rosie brought a  beautiful rag rug in for Show and Tell. Edward brought his cute little echidna which he cuddles at night.

We used the computer and practised making colourful names with capital letters.

Tomorrow is Ride to School day. We can meet other people and ride to school together.

It has been so long since our last post. A lot has been happening. On Monday we had some special visitors with Roxy the Ferret and Theodore and her baby guinea pigs. Today we had some cute little dolls from Asia that just did not want to lie down.

The Grade 1s worked on their little houses today. They had to use their previous knowledge of working with and making hinges to design a tissue box house that will pass a Huff and Puff test.

Tomorrow will be going for a short Road Safety walk around the school block looking for signs and practising crossing the road.

Mallacoota P-12 had 2 senior competitors attend Gippsland secondary regional swim carnival. Kahli Migotto-Brown and Jess Gellert. Both students swam remarkably to get to this level and should be commended.

Jess won her way through to States representing Mallacoota P-12 and Gippsland in the Freestyle and Butterfly at the Melbourne Sports and Aquatic Centre next week.

A big thank you to Nicole Gellert for taking both girls to Sale to participate in this carnival. Without such fantastic parents we would not be able to give the students the opportunities of larger schools.

Firstly a big thank you to Stephanie Mew for taking the students to Orbost for the zone swimming (hopefully you didn’t get too wet). See below for a description of the day by Steph.

The students did very well. All of them got a ribbon! Jess won everything such a sensational swimmer I want some lessons.  Arch got a second in butterfly and third in free, Arrow got some second and thirds as did Khali.  She swam amazingly well, her freestyle race was incredibly close you could have ‘thrown a blanket’ over the first three. The girls relay was a highlight as Belle stepped up an age group and they came second.

A teacher approached me from another school to remark how well we went as before three quarters of the way through the program we were less than ten points off the leaders! Next year you should push for a better lane, we were up against the wall in lane 6 simply because we were a small school. The only downside: we were caught in a massive down pour at the end and were still waiting on the relays, which the girls came 2nd in. Worth the wait

Congratulations to all the students who attended and gave their all. You have done yourselves and your school proud.