We did really well seeing as though we had one training session before hand, we will train up and get them next time. We lost both games but scored 4 points against Lakes Entrance. If we train for next year we could be a real threat to the other teams and they won’t know what has hit them. #droppingbasketssince1998

The boys did very well against tough opposition, especially considering we only had one training session. Our opponent forfeited the first game, so we had a practice match with the year 7s. In the second game we lost to a fairly good Nagle team but did manage to score some points. With some practice this team could be really good and might be a threat for the title next year.

Yr 7/8 Boys team: We had three grade 7/8 boys it was really hard as some were sick and some pulled out, but luckily we had two year 9s and won two games one was the Lakes Entrance and the other wasn’t there because they didn’t show up, but we also loss to Nagle. There score was 10 points and ours was 6 points, it was rough but we had fun and got to see the other teams play and go to have Subway, McDonald’s, and Peppers. So us grade 7/8s had fun and we’d like to do it again sometime and play

Archie: It was a fun day. Next year we will win.

Malakai: We did our best and maybe next time we’ll be dunking some more hoops

Brodie: It was heaps of fun playing Bball with Tyrone, next year we will dominate

Laurel: Really fun day. Everyone did really well. We will win next year and we will beat Nagle. BAKKKKKAAAARRRR

Jacqueline: It was a really fun day, everyone played really really well and hope to do it again next year. Go Pelicans!!!

Hannah: Such a great experience getting to play a different sport, Mr Berry was an awesome coach!

Rhys: Playing against Naegle made me realise how much harder I have to practice if I ever want to compete on their level. Sure it was demoralising, but how else can you learn how far you have to go and how hard you have to try.

On behalf of Bailey: Bailey hit a 3 point play (foul 2 pts, then hit the free throw), then a 2 pointer, to top score with 5 pts in one game. Awesome! 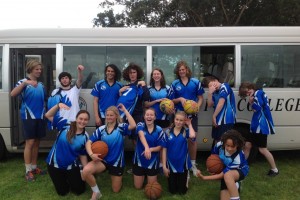 « The Magnet Chamber » Dress Up As An Occupation Day